Single Vehicle Accidents: Who Can Be Held Liable in 2021? 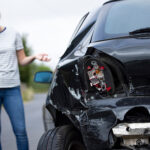 Many injured drivers assume that they cannot receive compensation if they have been involved in a Single Vehicle Accidents. While that is often the case, it is not always true. Here are three other parties who could be responsible for Single Car Accidents. The State or Municipality The government has a legal obligation to maintain their roads in good condition for drivers. If they knew or should have known of a defect in the road, they must fix it inRead More …